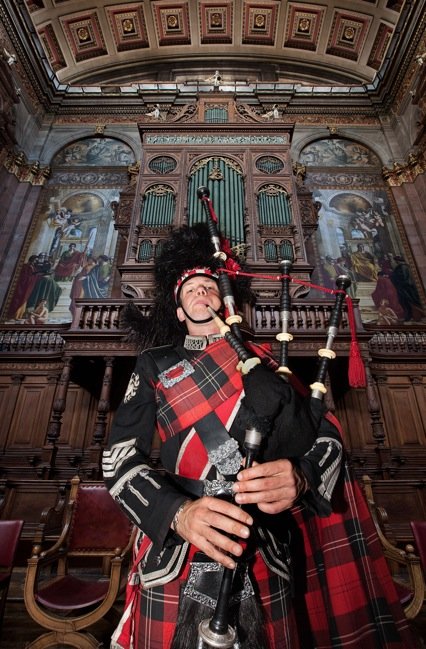 An innovative ceilidh band on the Scottish circuit, offering clients a Scottish dancing extravaganza with a contemporary twist.

The Reel Time Ceilidh band usually performs as a 3 or 4 piece, with the fusion of: Bagpipes, Guitar, Keyboard and a kit of drums laying the beat.  The bands performances are lively and will keep your guests ceilidh dancing into the wee hours.  They always explain how the dances are done (ceilidh calling), to maximise enjoyment for your guests and keep some order on the dance floor!  To book your funky ceilidh band, fill in our ceilidh band enquiry form. The band also comes as a 5 piece with pop singer for a great variety of entertainment for your event.

The band has invested heavily in its equipment and have excellent sound and lighting to make your event one to remember.  The equipment is insured for Public liability and PAT tested.

The Reel Time Scraggly Cats are a 5 or 6 piece band who play a mixture of rocking ceilidh tunes, Scottish song and pop anthems.

The Scraggly Cats was developed by the Reel Time Band by popular demand. Usually the band go out as a 5 piece with Singer, which allows them to cover a range of pop, rock, soul and Scottish songs. The band also add in fiddle, bass, a horn section (trumpet/sax/trombone) and percussion section if clients have a big stage and reasonably lined pockets!
to see and hear more about the Scraggly cats visit their website.

The band can provide a disco for your event, to fill in the bands break, or to split the entertainment over the evening.

From Aberdeen to Athens, Prague to Pollockshields the Reel Time Ceilidh Band has taken dance floors all over the world by storm.

Reel Time were described “an exciting new sound” by Edith Bowman, BBC Radio 1, at T in the Park 2006.
To see and listen for yourself:  visit the ceilidh band sample page.

The Reel-Time Ceilidh Band are providing music for the Homecoming 2014 Celebrations taking place this year.

It has been a busy year for the Reel-Time Band; listed below are some of the exciting events and festivals the band has played in 2013: